Christopher Cartmill is an award-winning playwright, actor and director. Cartmill was the 2009 Flournoy Playwright at Washington and Lee University — following such recent honorees as Paula Vogel and Neil LaBute. For the Flournoy, Cartmill directed a production of his play, THE APOTHEOSIS OF VACLAV DRDA and a staged reading of his comedy, THE ROBBERS OF MADDERBLOOM. In 2006, Cartmill was commissioned by Nebraska’s Lied Center for the Performing Art. HOME LAND (the play commissioned) was performed in a concert reading at the Lied Center in May of 2009 with a cast that included; LeRoy McClain, Kathryn Hwang, Teddy Cañez, Dan C. Jones and David Strathairn. HOME LAND directed by Kristin Horton. The journey in writing the play HOME LAND became the solo performance and memoir — THE NEBRASKA DISPATCHES, published in 2010 by the University of Nebraska Press. Christopher Cartmill’s short film, THE FERRIS WHEEL SONG (directed by Richard Jack), had its premiere in 2008 at the Coney Island Film Festival. His plays include: INCORRUPTIBLE: THE LIFE, DEATH, AND DREAMS OF MAXIMILIEN DE ROBESPIERRE. INCORRUPTIBLE premiered at the Bailiwick Repertory in Chicago and received a Joseph Jefferson Citation for Outstanding New Work. LIGHT IN LOVE, which premiered in Chicago, received the Society of Midland Authors Award for Drama and the Joseph Jefferson Citation for Outstanding New Work. LIGHT IN THE HEART OF THE DRAGON received a Jeff nomination and was awarded the John W. Schimd prize for Best New Play. His play LA CHASSE had a successful run in Los Angeles garnering a Drama-Logue Award for Outstanding New Play. The play has continued in New York readings and workshops with David Strathairn and Stephen Schnetzer. In 1999, ROMEO'S DREAM was given the Roger L. Stevens Award from the Kennedy Center Fund for New American Plays. BENJAMIN CONSTANT was presented in a reading by the Blue Light Theatre Company with Joanne Woodward. Christopher is part of a small writer's collective called Groop with Barbara Hammond, Adam Langer and Jane Gennaro. He worked with the One Arm Red Theater Company and Artistic Director Adam Adams, creating new work and performing existing material — including a production of his play, LIGHT ON THE GOLDEN SLIPPER in the Berkshires.

With the Gad's Hill Theater Company, he created and directed a new version of Moliere's TARTUFFE which premiered at New York City's ArcLight Theatre in 2003.  Christopher's adaptations of Tennyson's IDYLLS OF THE KING, LANCELOT AND ELAINE continue to air on New York's WNYC. He has participated in an ongoing guest artist program at Lincoln Southeast High School in Lincoln, Nebraska.  From that collaboration has come the plays, HISTORIOLA, THE SPECTRE BRIDEGROOM and Washington Irving’s THE LEGEND OF SLEEPY HOLLOW, which has had over thirty productions around the country, including an award-winning production at the University of West Virginia.  THE SPECTRE BRIDEGROOM and SLEEP HOLLOW are published by Playscripts Inc.

His acting credits include, on film, the role of Leonard Grover in the 2012 Steven Spielberg film, LINCOLN and James P. Ferguson in the upcoming National Geographic Channel film, KILLING LINCOLN.  On stage, Cartmill played the title role in Jack Moore’s KILLING JOHN GRISHAM, which premiered in the 2011 New York International Fringe Festival.  He played Barney/Max in the long Off-Broadway run of THE DIRECTOR with John Shea. Christopher also appeared as Ganya in an Off-Broadway production of Dostoyevsky's THE IDIOT. He recently did a run as Peter Barton in Clifford Hart's BARTON'S CROSSING at the famous Cherry Lane Theater in Manhattan.  His other credits include: Edmond Dantes in THE COUNT OF MONTE CRISTO, for which he was nominated for Chicago's Joseph Jefferson Citation for outstanding performance, Garry in NOISES OFF (also Jeff nominated), Lorenzo in THE MERCHANT OF VENICE, King Arthur in THE IDYLLS OF THE KING and Stephen in THE LISBON TRAVIATA, for which he received the Joseph Jefferson Citation for performance.

He has directed such various works as the operas ACIS AND GALATEA, THE EPHESIAN MATRON, AMAHL AND THE NIGHT VISITORS (at Princeton University) and the plays A PHEONIX TOO FREQUENT and TARTUFFE.

He received a B.A. in Chinese and East Asian Studies at Washington and Lee University in Lexington, Virginia, and an M.F.A. in Acting from the University of Virginia. He also did graduate work in Chinese at Fu Ren University in Taipei, R.O.C., and was accepted to the Royal Scottish Academy for Dramatic Arts in Glasgow. He is a member of the Dramatists Guild, Actors Equity Association, the Screen Actor's Guild, and AFTRA. Christopher spent time writing at the Tyrone Guthrie Center in Ireland and the Kimmell Harding Nelson Arts Center in Nebraska.

Christopher is now a professor at Rutgers University in the Mason-Gross School of the Arts, where he teaches Global Theatre, The Aesthetics of Space, Playwright/Director Workshop and Advanced Text.  For seven years he was an adjunct professor at the Gallatin School of Individualized Study at New York University, teaching theater literature courses (Romantics and Revolutionaries: Theatricality in the Age of Revolution; Philosophes and Follies: Theatre in the Age of Enlightenment; Leviathans, Lovers and Libertines: Baroque Theater and the Aesthetics of Grandeur; Asian: Ritual and Performance), playwrighting and acting.  He was named the Gallatin Advisor of Distinction in 2011.  He is also currently teaching graduate students at Rutgers University.  He created a on-going series of integrated-arts programs for the New York Public Schools, in association with "Learning through an Expanded Arts Program" and has written and performed special programs for the Art Institute of Chicago, the Metropolitan Museum of Art and the Yale Center for British Art. 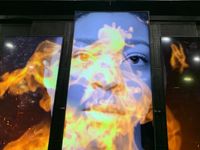 If all the world's a stage, then why fill it with utter nonsense? In this wicked satire of epic proportions and theatrical pretensions, an invitation to see the final dress rehearsal of a tragedy proves to be pure comedy.

THE NEBRASKA DISPATCHES: FORWARD AND REVERSE

Christopher Cartmill performs a tale of history, home and an American identity — based on his book, THE NEBRASKA DISPATCHES.